Sergia in the dark green top and blonde hair takes on Cathreen in the light green top and brunette hair. They start the match in office clothing. The girls tussle and pull hair, but their main focus is to strip the other down and abuse each other’s tits. The clothes are off after a while, leaving the girls topless and wearing thongs, and they squeeze, maul and slap each other’s breasts until one can take no more. There is no love lost here and even after gaining victory, the winner can't help but get in a cheap shot or two..
Sergia 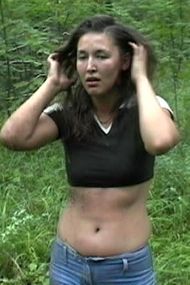 Sergia in the pink string top takes on the very tough Veta in a lilac string top. This is another breast abuse match, but as these two are so tough and determined there is plenty of catfight action too. The girls strip each other’s tops off to expose bare breasts and they are soon squeezing and mauling each other, but both seem capable of taking serious abuse and as frustrations grow and the long match progresses both resort to catfight tactics and slap, tussle and hair-pull to try to gain the upper hand. In the end it's pretty much an even fight except one seems to run out of energy, whilst the other takes advantage to seize the victory.
Sergia