Annie is a striking redhead with a red crop top and is next to take on Sergia in her camouflage top. The busty pair of stunners take off their tops after about 8 minutes and wrestle topless from then on. Both look hot in their denim shorts, and even hotter as this marathon grappling match seems to be happening on a hot day, making both girls sweat with effort. Both resort to some hairpulling and other rough tactics, but it's a fair fight with both gaining some advantages and submissions. This is a great long match that eventually ends in exhaustion and they round it off with a bit of arm wrestling.
Sergia 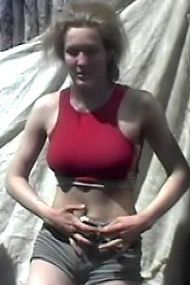 Molly, in a striped top and denim shorts, takes on the cute and flexible Sergia who starts the match in a camouflage top. Both girls take off their tops at around the 11 minute mark, and then their bras come off after about 24 minutes in this marathon grappling match. It's rough wrestling with some hairpulling between two evenly matched girls that will leave you panting just as hard as they are.
Molly 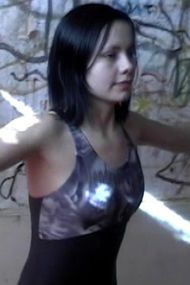