Both ladies are dressed in white panties and white sports bra, and both sport yellow rubber gloves. McKenzie (formerly Chelsey) with her long blonde hair, towers over Holly, who has gone for the brunette look today. As part of the rubber gloves wrestling league our sponsor likes to see the girls arm wrestle before getting down to the action and after testing each other out on either arm, the battle begins. The girls start out in the sports bra and panties, but at the half way mark they go completely naked. Holly has many years of mat experience and even though Chelsey is much bigger, Holly has many tricks to keep her in the match. The final result is a close victory for one of the girls, but well worthy of a rematch at some stage.
McKenzie 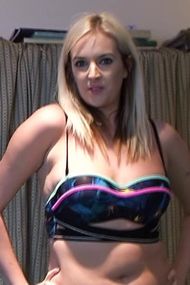 Another rubber glove match with the added spice of sex fighting. Jayda in the yellow gloves starts the match in her patterned bikini, and faces Holly in the black rubber gloves and white bikini. Jayda takes the early lead by beating Holly convincingly in some arm wrestling and continues to dominate the wrestling overpowering Holly with ease. After about 10 minutes the rules change and stripping your opponent is allowed as well as sex attacks. Jayda takes full advantage of this and abuses Holly and humiliates her. She dominates so much she doesn't even lose her top as Holly is laid out naked and caressed all over by Jayda's rubber-gloved dominance.
Holly