No introductions here, just straight into the action. A tall Asia in white underwear takes on a smaller, but very determined Marie in black underwear. This is pretty brutal and both ladies show their bruises to the camera at the end of the fight, which you won’t be surprised to see after such a tough fight. Face-punching wasn’t allowed, but these girls use every other tactic and style to inflict pain on each other. With hairpulling, body punches including to legs, butts and crotch, these two are wild. Amazingly this lasts 9 minutes and only exhaustion finally finishes one girl off.
Marie 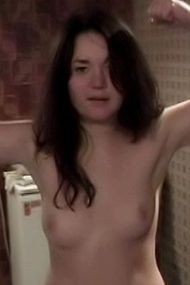 The tall Asia with the short hair and pink panties takes on the topless Kami in black thong. No introductions on this one as the girls go straight to battle. Punching anywhere except the face is allowed and kicking and kneeing each other is also allowed. Not much room to fight in the flat, so most of the action is punching and slapping, with not much grappling as the floor is hard and the room is small, so there’s nowhere to run for either girl, both of whom end up with plenty of bruising which they show to the camera at the end.
Kami