If you haven't seen a Russian Catfights title before, you'd better be prepared for some wholly unscripted, brutal and ultra-competitive fighting between young women who appear to have genuine grudges with each other. Not many holds are barred in these four frantic matches, and the fact that each one lasts 15 minutes is incredible in itself. These girls may be slim and attractive, but they're certainly tough - their cries of pain and furious dialogue with each other highlights what they're putting themselves through and how badly they want to succeed. The first three fights take place outdoors on the grass. The optimistically named Lucky takes on Zena wearing jeans and sleeveless tops in a scrap that goes all the way before reaching a conclusion, including slapping and breast mauling, before she returns to fight the lovely Lena in a contest that is even more feral. This one includes clothes ripping, bared breasts and, by the end, two utterly exhausted catfighters. Sultry redhead Christine faces Kami wearing denim shorts, a match that starts outdoors and ends up topless in an apartment setting. Finally, and perhaps climactically, Christine returns to face Lena, both girls nude save for skimpy thongs. This scintillating and savage match leaves both reddened and bruised, and like all of these fights, it does not stop until a clear winner emerges.

The scene is set for an epic and brutal fight as Lucky, an attractive fair-haired girl faces up to pretty brunette Zena. The girls are clad in jeans and sleeveless tops, but when they start fighting their attire will be the last thing on your mind as they go for broke in their desire to destroy each other. Fighting outdoors on the grass, as soon as they fall to the ground, locked together like feral cats, the action takes a nastier edge, with slaps and breast mauling readily exchanged. For a while it looks as if Lucky will not live up to her name as she suffers abuse from above as a wild Zena, despite being the smaller of the two, appears to dominate. In return, Lucky grabs at her tits and screams and swears. Before the end though, the tables turn quite dramatically. Lucky manages to assert herself, pinning her opponent and even ramming a knee into her face to keep Zena in place. 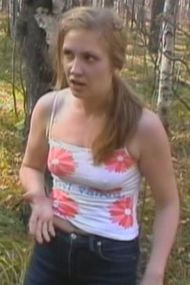