"Here We Go!" announcer Nicki says as she starts the next Real Catfight in motion between Lisa and Candy. All I can say is, I wouldn't want to have to fight Lisa. She is stoutly built with the kind of tough woman look that would make most women throw in the towel before the fight got started. But, not Candy, as she gamely takes on Lisa who looks like she just stepped out of her Peterbuilt Rig after driving over to Crystalfilms to do her Real Catfight. Geezus, I thought, "Candy doesn't stand a chance." Period. But, soon, Candy has Lisa Screaming "Let Go Of My Fucking Hair Bitch" The two big girlz grapple against the wall in the corner of the room and it is immediately evident that both of these tough women (you hearin' me Bear?) are used to "Woman-Handling" the girlz they fight against as they crashed from one wall into the other wall. The wall caught as much hell in this Catfight as the women did! Lordy, huge Gobs of hair were pulled out of Lisa's scalp in this brawl as I saw clumps of hair drifting to and collecting on the floor. The Fighters take a water break, and then these two "Heavy" hitter women get back down to some intense fightin' that doesn't last very long after one of them injures her hand and has to quit. 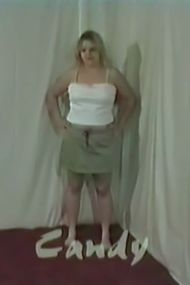 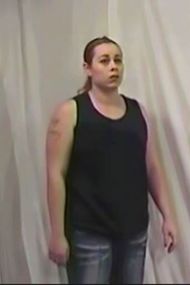