Andrew looks like the proverbial lamb to the slaughter as he dares to share mat space with Kassidy, one of the tallest, strongest and most dangerous female wrestlers in the UK. Kassidy is so potent that it's actually very difficult to find suitable female opponents for her - they're out there, but they're few and far between. On her days off, there's nothing she likes more than destroying male opponents, and that's exactly what she does here. As Andrew pathetically moans, Kassidy uses her full repertoire of holds and sheer physical strength to utterly overwhelm him. Her long, thickly muscled legs ripple as she scissors him again and again. She headlocks, twists and bends him, folding him up like a piece of paper within a boston crab. Her combination holds stretch him to rarely seen extremes, and Andrew can offer nothing but token resistance. This is, naturally, a one-way female on male wrestling domination - 15 minutes of brutal holds.

This comprehensive mix of female versus male wrestling action comprises everything from genuinely competitive mixed gender action, to a two-on-one domination and torture session. Most of the material was filmed at our live event in 2006 but is available on DVD for the first time. Amrita, an exotic and sexy Japanese girl, almost pulls the hopelessly overmatched Philip apart with some of the cruellest holds you're ever likely to see. It's no surprise that Amrita is a popular dominatrix, but here she proves that she can do a whole lot more than pose and punish - this beautiful girl knows every hold in the book, and her legs appear to be made of steel. Kassidy, as strong and tall as they come, then destroys Andrew in similar style. From one brutal, crunching hold to another, Andrew is in massive trouble from the outset. After a teaser clip appeared on M74, the demolition of Simon who is up against the PVC-clad team of Zara and Lina appears here in all of its 30-minute glory. Both women swat away hapless Simon as if he were no more than a fly. Nadia has far more trouble with a genuinely competitive Steve, but this is one girl who has the firepower and attitude to take on someone twice her size and win. This close and sweaty contest ends in a series of savage armlocks and chokeholds, and to her credit, it's Nadia who's celebrating at the end.

If you haven't seen Amrita before, you've missed a treat. She's a slender and utterly beautiful Japanese girl who just happens to also be a cruel dominatrix. She can also wrestle - hard, fast and skilfully. While she won't fight other women, she is more than willing to destroy any man that crosses her path. You almost feel for Philip, who is utterly annihilated by this goddess of the mat. While teasing him and warning him of what's coming, she pulls off every vicious submission hold in the book, moving from one to the next in a blur of feline energy. Amrita's body looks incredible in her leopard print lingerie, but Philip has no time to appreciate it, as she pins and scissors him over and over again. Some of those head scissors, particularly the numerous reverse applied scissors, make Philip turn a funny shade of purple and you suspect he's about to pass out. He taps desperately again and again as Amrita showcases both her own superb skill and female power in general. 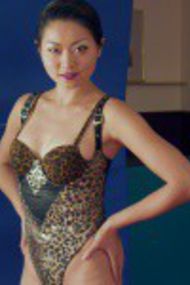 First Lina, a deadly assassin in black, and then Zara, who wears hot pink, have their fun with him, transferring him from vicious head scissors to uncompromising arm and leg locks. They compound his discomfort with the odd bit of whipping and tickling. Finally, both girls collaborate, trussing him like a hog at both the ankles and wrists. They proceed to hurt and humiliate him further, even standing on his back in their high-heeled boots. Festelle collectors may wish to know that the last minute of this film, with the two girls in full control, appeared on M74 as a teaser clip. 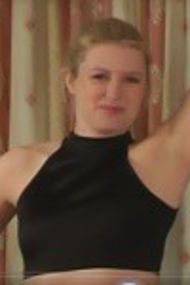 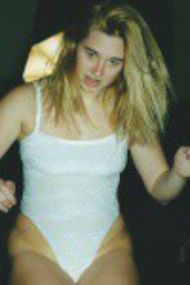 This genuinely competitive and high energy wrestling match pits Mixed Wrestling Wales boss Steve against Nadia, a buxom, big-breasted pot of female energy. This 15-minute contest is fought in a confined space meaning there's nothing to do but grapple - and grapple these two certainly do. Steve is a superb wrestler, but Nadia - wearing a pink bra top and joggers - smells blood and wants the win. Unlike some mixed matches, Steve is not the type to just roll over and let this happen. He wrestles Nadia hard, pins her several times and puts her in some very awkward situations. Yet, as the sweat starts to flow, Nadia gives as good as she gets, eventually forcing a submission through a textbook armbar. Even better is a crippling chokehold and body scissors combination from behind - one that leaves Steve gasping and choking. He still isn't quite finished, but it's girl power that holds the aces here. 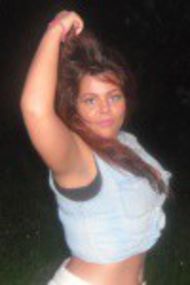