Our friends in Russia seem to have developed a distinctive style of fight film, and it's one that we like! Of course there are language difficulties and there is quite a lot of dialogue here but once the fighting starts well...who cares!

The first fight breaks out after a heated discussion between two scantily-clad young women. However, 'scantily-clad' is still overdressed as far as these two are concerned so there's a pause while they strip down to their brief thongs and really get to grips. Although not billed as a nude fight the thongs worn in this match are very brief so there's a lot of unintentional exposure! 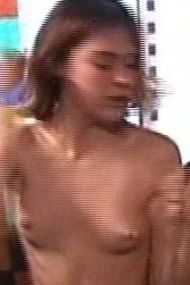 The second fight starts more formally but once the girls get to grips the fighting is if anything even more furious. It ends when both contestants are exhausted and some sort of a truce is called while they compare their bruises and other injuries. But as the film ends we're left with the impression that their ill-tempered scrapping is about to break out again!