An argument between Kami, Jane N and another girl leads to a fight between Kami in the red top and light blue denim miniskirt and Jane N in the orange top and white miniskirt. Much of the fight is stand-up slapping and hair-pulling and Jane holds her own against the experienced Kami, but Kami's superior grappling skills finally pay off towards the end as the match goes to ground and an exhausted Jane is finished off.
Jane N 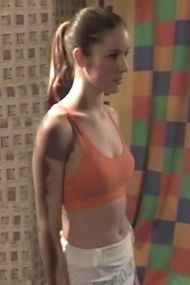 Whilst doing some home improvements at Kami's flat Tammy's lack of effort starts to annoy Kami. Tammy in the white jeans and Kami in the brown jeans eventually get into a fight. They weren't really dressed for fighting, but naturally Kami's husband was there to catch it all. Again Kami's superior grappling makes the difference in this catfight that has hair-pulling, slapping and kicking as well as bad tempered arguing.
Tammy 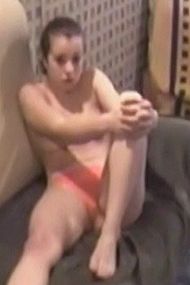 Zena in the blue bra can pick a fight with anyone anytime, and this time she's trying to bully Tammy again. Tammy in a black bra will happily defend herself though and feels she's learned from their first fight. This time she surprises Zena by being no pushover and Zena backs off after a few minutes, but they then enter the living room and start to chat. It's clear the issue isn't resolved and they are soon both at each other. Tammy doesn’t back down this time at all and gives Zena all kinds of trouble. She's all over Zena, but can Zena's experience help her hold on??  A gripping fight...
Zena

Straight to it in this swimsuit fight as Zena with her ponytail is at it again as she takes on Sheila with her lighter brunette hair down. Zena is always supremely confident, but Sheila looks happy to get to it too. A slapping hair-pulling fight makes the girls work up a sweat, but once the battle goes to ground one girl’s superior grappling and fondness for face-sitting help her win this tough sexy fight.
Sheila 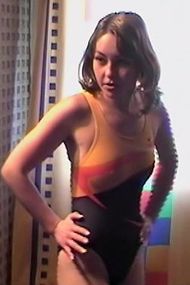