In the end though it is Holly who claims the full dominance, and her facesitting technique is as full and explicit as such things get, her shaven pussy flush over the dark-haired girl's helpless face. Holly also plays with Natalie's breasts and constantly reaches down to tap, prod and rub between her legs. Clearly having too much fun to even contemplate stopping, this one runs for an astonishing 30 minutes.

There's little that's more humiliating in wrestling than having your opponent sit on your face until she's had enough of taunting you. This DVD presents three matches, all of them nude, in which the one and only aim is to sit on the other girl's face for as long as possible. Filmed with erotic (rather than competitive) intent in mind, there are numerous lingering facesitting scenes as these girls straddle each other into lengthy submissions. Larra and Lilly are the first to face off, and both get to enjoy their time in control, though it is Larra who earns the final bragging rights. As she bounces and grinds on Lilly's face she even tells her beaten opponent to shut up as she incoherently moans beneath her. Holly and Natalie are two of the hottest women at Festelle and the dominance changes throughout their marathon, 30-minute encounter. With Holly finally in control, there's a highly sexual element as she squeezes Natalie's breasts and slaps between her legs. Natalie returns in a final match with slim, athletic Adreena. Having had Adreena's slim tattooed thighs clamped around her head and face, Natalie gets her revenge with a lengthy facesit pin. Her excitement as she toys with her beaten opponent can be clearly seen.

Nude from the outset, this match is destined to be settled in the most humiliating manner possible -; via lengthy facesit holds. Big girl Larra is the favourite, taking on the tall but much slimmer Lilly. Both keen wrestlers, it is initially Lilly that's in control, proudly pinning and sitting on the larger woman's face. As she does so, she also reaches down to tease her tits and even reaches further back to rub between her legs.

However, this only serves to fire Larra up. Once out of hold, she reverses the situation completely and takes up permanent residence on Lilly's pretty face. Cursing at her and bouncing around on top of her, there is no way back for the slimmer girl now as a dominant Larra crushes, taunts and controls her.

Natalie doesn't want to surrender, but she soon has Adreena's slim thighs clamped around her head again, and -; humiliatingly -; her opponent's tight pussy over her face. Revenge, as they say, is sweet, and Natalie certainly earns hers. She ends this match having completely turned the tables, her lips parted with ecstasy as she sits on Adreena's face, plays with her private parts, and even bends her right over at the end in a naked matchbook pin. 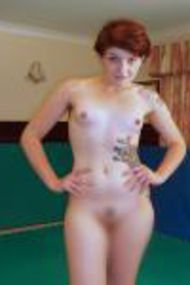