Finally something really new and very exciting. The men get down on all fours and are ‚ridden' by the girls who attack first each other's bellies, then their breasts, then their hair and each attack continues until one of them can stand the pain no longer and in spite of being humiliated in the presence of her man, is forced to capitulate. 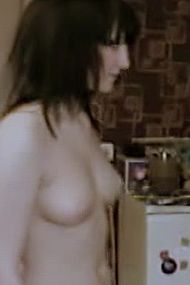 see all series MR2 downloads
A true test of pride and endurance!

Then things take a different turn and we're treated to something new, a mini-tournament of mixed arm-wrestling featuring the same girls, plus another guy called Oleg. It's deadly serious and, very unusually for anything ‚mixed' the ladies don't always win!!!

MR1 introduced us to Russian mixed wrestling, but MR2 is something of a step change. First of all, it's topless. The wrestling is at least as hard as it was in MR1 if not harder, and there are some very interesting - and unexpected - innovations.

The main event is a wrestling match between Kami and Vit who, to his credit, really tries, and not without some success, but eventually class tells and Kami makes very sure he realises he's been licked by standing over him and pinning him in victorious poses.

Vit, ever a glutton for punishment, then takes on Gernia but with no greater success. It is a highly competitive match though; it's just that he's outclassed by these girls.