Stunning blonde Axa wears a black swimsuit and sexy tights for this entertaining match with the small but ultra-flexible Micksta. Axa gets to show off a number of her wrestling holds in this tightly fought contest, including using those long legs for scissor holds. She wins a third and final submission via an excellent side headlock.

This action-packed DVD features no less than eight tough and evenly fought non-topless mixed wrestling encounters. The men here don't just roll over and surrender, they fight back, but are all too often countered effectively by their sexy female rivals. Look out for scissors, pins, headlocks and every combination hold in the book.

Clad in tight pink top and hotpants, Pippa is a trim and athletic wrestler, but she certainly has her hands full with Steve, who is not only much bigger than her, but a very good wrestler. Slowly but surely she picks him apart, withstands the holds he puts on her, and wins a superb submission via a muscular head scissors. 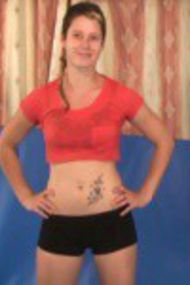 This is a lively and competitive mixed match between the sexy and tomboy-ish Cherry Bomb and the agile Micksta. Both have fought often before and certainly know what the other can do. Cherry, wearing a black two-piece outfit, rolls, pins and scissors as hard as she can, winning a well fought victory.

Comment: Another victory for girl power as Cherry bombs Micksta! 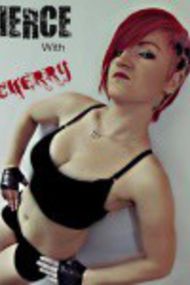 The writing looks like it's on the wall for Steve, as strong, heavily tattooed Dynamo takes him down and scissors him from the outset. Being a skilled competitor himself he comes back into it, winning a submission from his female rival by stretching her backwards. This, however, only stings the tough female into immediate reprisals. 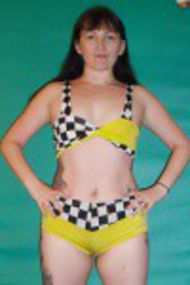 Steve fancies himself as a bit of a wrestler, but the trouble is, so does the tough, wiry girl he's facing - the always committed Cherry Bomb. After some eager tussling and some very evenly matched wrestling, Steve's superior size and Cherry's energy and agility more or less cancel each other out, leading to an exciting conclusion.

Despite this being a female vs male match, Dynamo and Micksta are approximately the same size and of similar strength. This makes this non-topless duel a real battle of attrition, with first one and then the other in command. Dynamo then gets her prey in a vicious body scissors and you can see the determination on her face as squeezes!

One of the hottest wrestling girls around on UK mats at the moment, Axa naturally looks amazing in the two piece outfit she wears to wrestle big guy Steve. As always, Steve proves tricky opposition, but Axa's long, constricting legs and agile physique are a real handful for the tiring male. Definitely a mixed match to watch!

Athletic though he is, Micksta seems completely overwhelmed by his fit and trim female rival here. Pippa, a lovely sight to behold in her curve-hugging two-piece, has the beating of him, controlling him almost throughout the entire contest in a series of headlocks and body presses. It's another victory for girl power.