Blonde Kristy, dressed in her short denim dress and red blouse versus Brunette Amanda in the black dress and blood red top. This catfight is strictly business. That is, these girls have no particular animosity or axes to grind, but rather just enjoy a good catfight and need the money. They must have needed the money bad, because they tear into one another like their respective car notes aren't going to get paid if each doesn't snatch the "Winners Pay". "Start!" Amanda gets out the gate first and grabs a thick handful of hair along with the title of "Aggressor". Immediately there is closed fist punching and body controlling hairpulling action which lands the two women in the grass of the park like setting for this outdoor fight. These women both know how to do a classic catfight and use the catfighting moves to get into the dominant position to punish their opponent. This is a pretty even match up with the girls rolling around on the ground pounding on one another's heads so hard that it sounds like a woodpecker convention from their fists reverberating off their respective skulls. It is just getting good when one of the girlz says "stop, stop, stop." No, it is not the fighter who is loosing calling for the stopping of the action, it is the girl who is WINNING! Why is this happening? Simple. This catfight has drawn blood. Who's is it? I'll never tell. Mean huh. ? The intensity of this fight only intensifies with some genuine Pissed Offedness thrown in when the contest resumes. Lots of "Say You Give" called out during this highly competitive match. The only criticism I can offer in this very well done barefoot Rules Catfight is that there was not much face slapping, with the punching being to the back of the head. 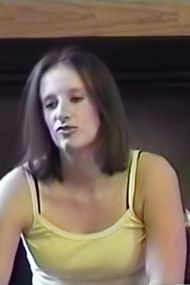 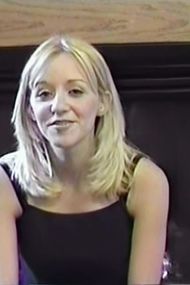